Long ago… back in the year 2015… I completed the University of Tasmania’s ‘Understanding Dementia Massive Open Online Course (MOOC)’ – something I would highly recommend to anyone from any walk of life who has an interest in dementia or dementia care.

Particularly impressed by Dr Jane Tolman’s presentation on the different domains of dementia, I felt it was something everyone should be familiar with!

I immediately started to apply her teaching to why people with dementia may have difficulty eating and drinking. Also inspired by Hilda Hayo (Chief Admiral Nurse), here are a few key ideas:

This may come as a shock for some – dementia is just a memory problem, right? Wrong! Dementia is a neurodegenerative disease of the brain; sadly when your nervous system is under attack, more than your memory will be effected.

So why is eating a problem?

I’ve said it before – eating is a complex cognitive activity. Yes, to eat you need memory! Memory and awareness of the time, such as when you last ate etc. However, you also need initiation, planning, object recognition, environment recognition, judgement, concentration, attention, understanding and much more.

People with dementia often lose these abilities, meaning: they may not start eating a meal when it is put in front of them; they may forget what they are doing half way through; they may leave the table during the meal; they may not recognise you are giving them food or even that they are hungry; they may not know how to use the cutlery or bring the food to their mouth.

This is an interesting one; mental health is not always associated with dementia, but people living with it can experience hallucinations, delusions and depression.

One possible outworking of this – if food is believed to have been poisoned, it probably won’t be eaten.

Hallucinations can include olfactory (smell), visual and tactile (feeling). Imagine if your food had a strange smell or tasted vile, imagine if you could see something unpleasant on it.
It’s unlikely it would be eaten.

Have any of you ever felt depressed and lost your appetite? Enough said.

To eat you don’t just use your brain, you need your body

Probably the most common physical problem in eating and drinking for people with dementia is swallowing difficulties – it’s certainly a good job we have fantastic Speech and Language Therapists, Nurses and Dietitians to help tackle that one!

Also, losing the physical ability to pick up food with cutlery can be a major issue – thanks again are due for the brilliant multi-disciplinary teams we have working on solutions!

The physical environment can also impact eating and drinking – it may be over-stimulating – causing distraction – or under-stimulating – enhancing depression or reducing the chance of the act of eating being initiated.

I think by now we’re getting the idea – dementia is more than just memory loss.

Loss of cognitive and physical capacity will undoubtedly impact the ability to function.

People may think people with dementia are being “naughty” or “manipulative” but the truth is very different.

Confusion, fear and the psychiatric effects of dementia can have understandable impacts on behaviour. After all, if you were in an unknown environment feeling alone, depressed, confused, and suspicious, how would you behave? Especially if somebody tried putting food in your mouth and you didn’t know what it was or how to say ‘no’!

Another point highlighted by Dr Jane Tolman is the loss of social understanding in dementia – losing the ability to know what is socially acceptable and the lack of judgement or ability to reason will also understandably lead to certain behaviours.

I hope this little insight has been useful in helping you understand more about dementia and why people with dementia may not eat as much as they need.

I’m excited about seeing how all this applies in acute hospital wards and what more I may find out through my study… keep connected with me to find out! 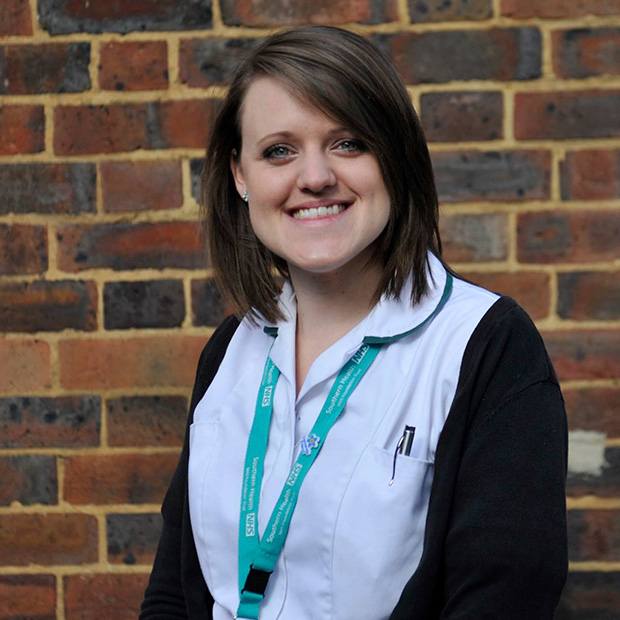 Naomi Gallant is an Occupational Therapist with King's College Trust, living in Kent.
She has recently completed a Clinical Academic PhD in Dementia Care at the University of Southampton.